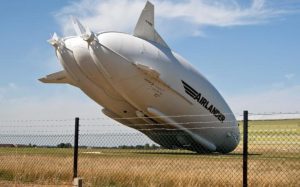 The world’s largest aircraft Airlander 10, a part-plane part-airship being developed in the UK, has crashed during its second test flight

The 92-metre-long  craft was damaged during the flight from RAF Cardington airfield, Bedfordshire.

The £25m aircraft was first developed as a surveillance aircraft for the US army’s Long Endurance Multi-intelligence Vehicle (LEMV) programme. It was to provide intelligence, surveillance and reconnaissance to support ground troops, and a first flight took place in 2012 before the programme was cancelled in 2013.

Hybrid Air Vehicles (HAV), which is developing the Airlander 10 reacquired the aircraft and brought it to RAF Cardington where it was reassembled and modified for civilian use.

The aircraft powered by four diesel engine-driven propellers could be used for various roles including transporting freight, delivering aid and passenger travel.

The Airlander is about 15 metres longer than the biggest passenger jets, and uses helium to become airborne, travelling at speeds of up to 92mph.